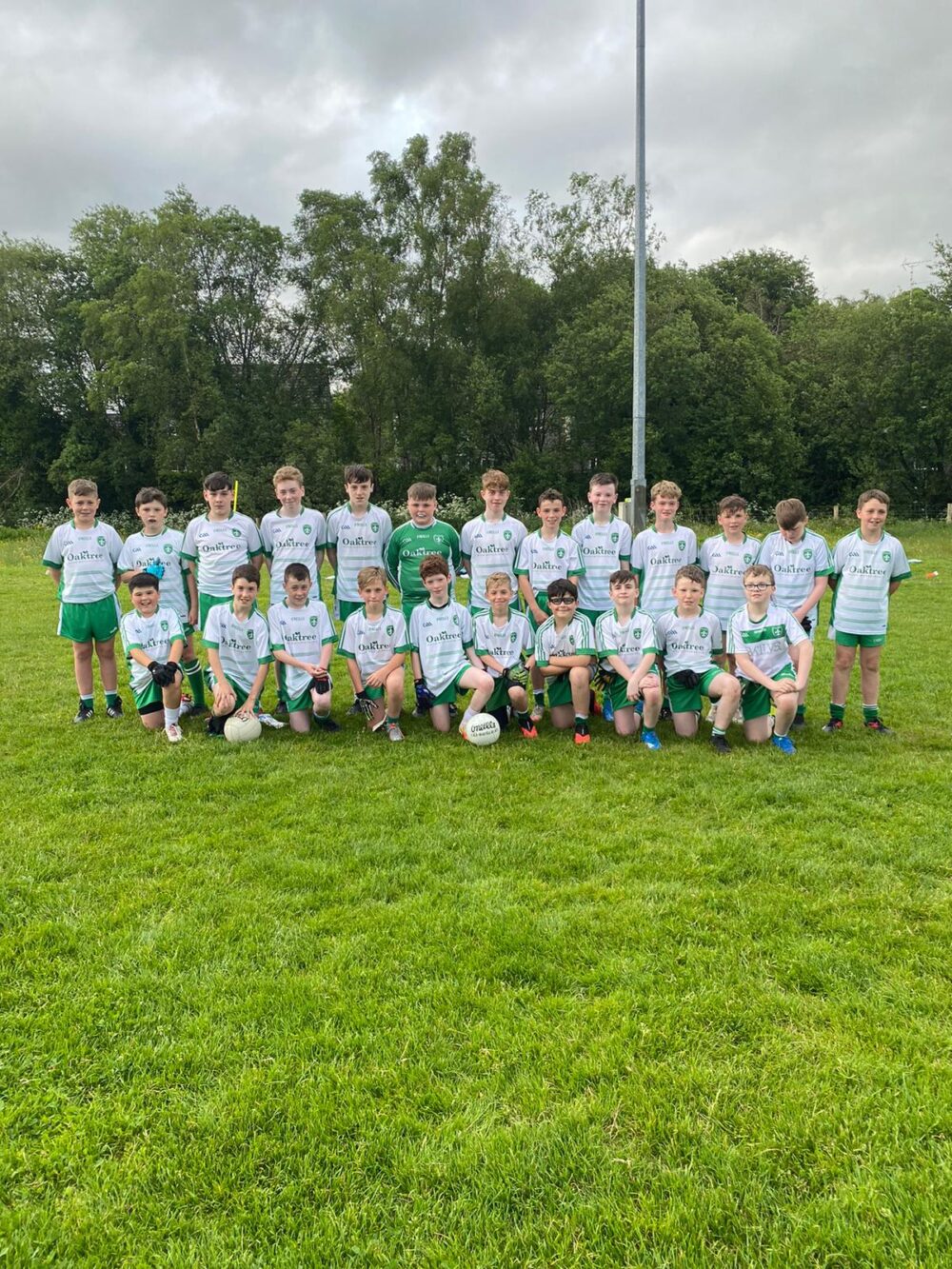 Brilliant win for Drumragh U13 boys

Patrick GriffinJune 14, 2021Comments Off on Brilliant win for Drumragh U13 boys0403 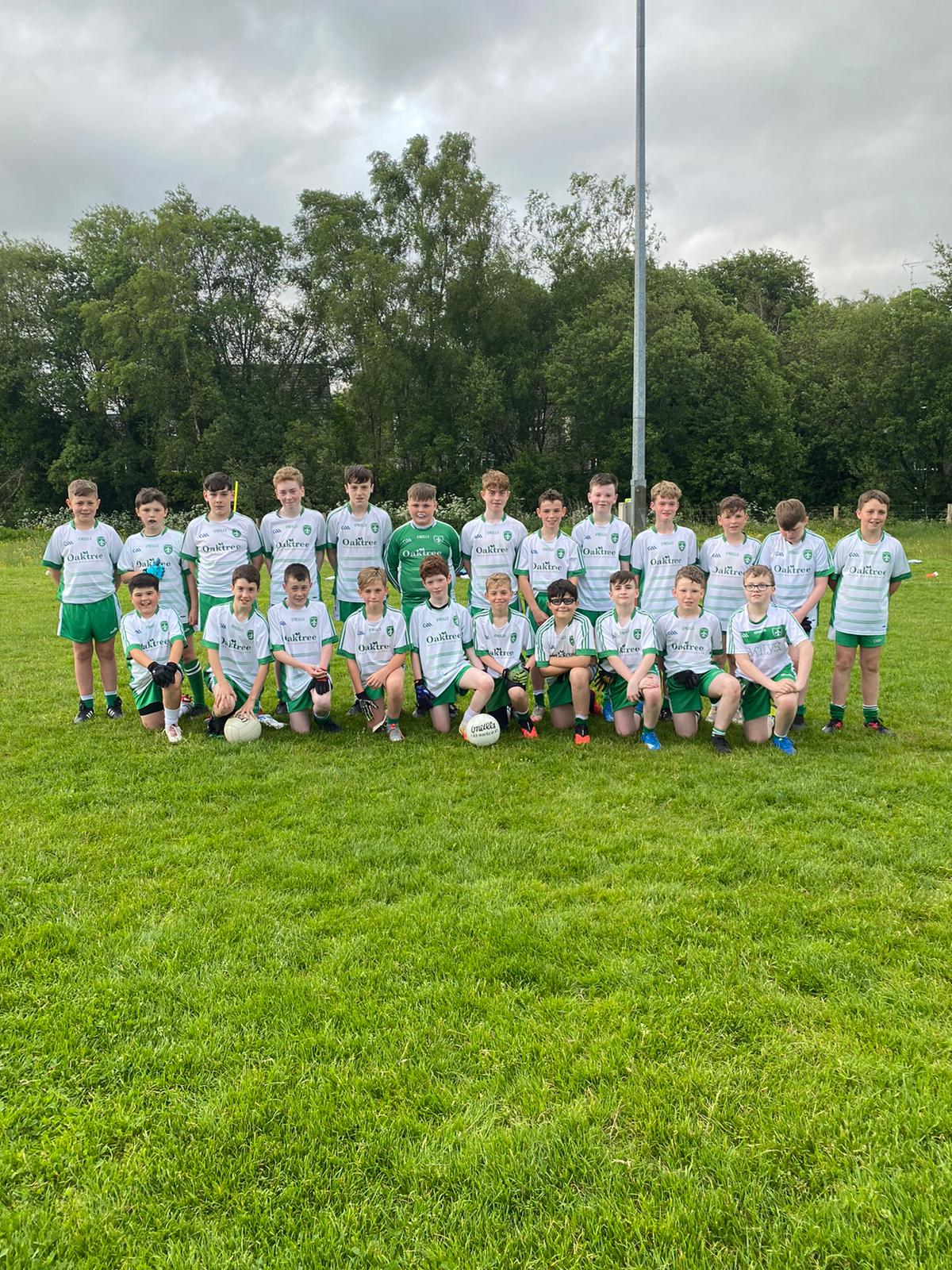 A terrific game at Clanabogan between Drumragh and Greencastle saw the home side emerge with an excellent victory last Wednesday.

A goal from Shay Donnell got Drumragh off to the perfect start but Greencastle didn’t take long to get back level with three points in quick succession.

Conor McLaughlin put Drumragh back in front with a nice point but, again, Greencastle responded well hitting 2-1 to take the lead for the first time. The full-back line of Tiernan O’Donnell, Shea Mullin and Sean O’Donnell did really well on a number of occasions to stop Greencastle extending their lead.

Drumragh then got to work cutting the deficit. Ryan Baxter kicked a free after he was fouled and then Ben McCullagh’s pass found Conor McLaughlin who finished expertly to the top corner of the net.

The game was end-to-end from an early stage and hugely entertaining. Drumragh goalkeeper Matthew O’Doherty did brilliantly to claim a high ball in over the heads of a few Greencastle attackers while Ronan Baxter, Matthew Barrett and Cohen O’Neill were having strong games in the half-back line.

Ryan Baxter converted another free and he then scored a brilliant point from play having caught a kickout at midfield and driving through the away side’s defence to split the posts.

A foul on Dara Cox allowed James Fyffe to put Drumragh ahead again from a placed ball and Dara then scored a free himself after he was fouled again.

Conor McLaughlin scored another free following a foul on Conor Fyffe before Matthew O’Doherty made an excellent save to protect Drumragh’s lead. A Greencastle point left Drumragh with a two-point lead at half-time.

Greencastle scored a couple of early points in the second half but Drumragh responded thanks to Ben McCullagh who did well to catch a long ball in before finishing confidently past the goalkeeper.

Drumragh kept the pressure on and were rewarded with a Conor Fyffe goal who received a pass from Niall Gormley to score. Dara Cox finished smartly not long after for another goal.

Greencastle took control of the game for a five-minute period and despite some really good defending from Shea Mullin, Matthew Barrett and Ronan Baxter, they added a few goals.

Ryan Colgan, Sean Boyle and Sean Sloan came on for Drumragh and that helped shift the momentum back in Drumragh’s favour. Ryan Baxter stopped the Greencastle scoring run with a free and Conor McLaughlin and Luke Hagan set Matt Gallagher up for a good point.

Again Greencastle fired back with a few points and Paudraig Gormley, Tiernan O’Donnell and Ollie Hagan came through with some big tackles as the away side looked to go back in front.

But Drumragh finished the game strongly. Ryan Baxter scored from a free, Niall Gormley set James Fyffe up for a point while Matt Gallagher reacted quickest when the ball came off the post to find the back of the net.

And from there, Drumragh held on for a great win in an excellent game of football.