A fantastic performance from Drumragh senior ladies saw them beat Castlederg on Saturday. This was their third straight win and they played some brilliant football throughout the game.

Drumragh got off to a slow start, however, and trailed 1-5 to 0-1 after 10 minutes with Eva McCaul on target for the home side.

But Drumragh really came into the game from that point onwards and dominated the rest of the half.

Grace O’Neill kicked a good score, a brilliant pass from Sorcha McKenna allowed Beth Donaghy to point, Eva McCaul fired over the bar and Neamh Woods set up Grace for another point.

The Drumragh defence was very much on top now too with Claire McGread, Edel Meenagh and Claire McLaughlin all playing well in the full-back line.

A turnover from Coblaith McKenna led to a point for Eva McCaul and Drumragh then went ahead for the first time when Eva finished well past the away goalkeeper having received Neamh Woods’ pass inside.

Castlederg responded quickly to go back level but Neamh Woods pointed for Drumragh. Again though, Castlederg answered back.

Drumragh were really starting to click going forward though and were rewarded with a goal from Beth Donaghy and a Grace O’Neill point.

At the other end of the field, Drumragh goalkeeper Oonagh McMackin dealt well with a high ball into the square while Rachel Cleary and Edel Meenagh made some vital blocks and tackles.

And this allowed Drumragh to build up a commanding lead before half-time. Beth Donaghy set up Eva McCaul for a goal, Beth added a goal and a point while Eva and Neamh Woods also put the ball over the bar to complete an excellent half of football.

The game was delayed not long after the start of the second half because of an injury to Claire McLaughlin who unfortunately had to go off.

Castlederg got the opening two scores of the half but Drumragh responded with a point from Eva McCaul after midfielders Julieanne Quinn and Joanne Barrett had combined to create the chance.

Blanaid McGarvey added Drumragh’s fifth goal and not long after Beth Donaghy completed her hat-trick with possibly the score of the game. Having received the ball 20 metres out, Beth took a look at the goals and fired the ball into the top corner of the net. Eva McCaul also added on a point from play after a good team move involving Joanne Barrett, Shannon Starrs and Aoibhinn Gallagher.

Despite more good defending from Josephine Quinn and Coblaith McKenna, and an excellent save from goalkeeper Oonagh McMackin, Castlederg got in for their second goal and tagged on a couple of points near the end.

But Drumragh were always comfortable and secured an impressive victory. 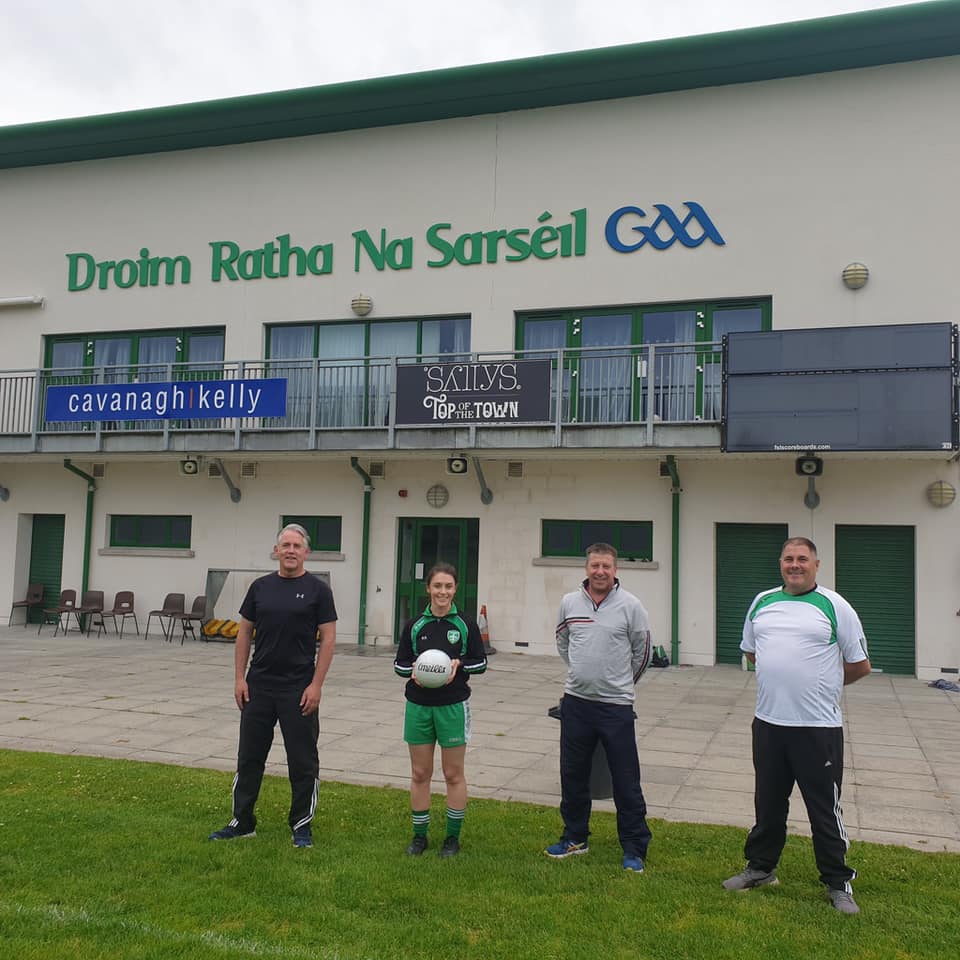 Thanks to Kevin Starrs from Starlight Electrics for sponsoring the match ball for the Castlederg game. Kevin and Shannon Starrs are pictured with Eamon Duncan and Mick Hurley from the senior ladies management team before last night’s game.
Drumragh are looking for businesses to sponsor the match ball at all the home games of the senior ladies throughout the season. Businesses in turn will be promoted via our social media outlets.
The remaining home games this season are:
Cappagh (Saturday August 7)
Moy (Saturday August 14)
Fintona (Saturday September 4)
If you are interested in sponsoring a match ball, please contact Neamh Woods (077 4944 8231).
Share