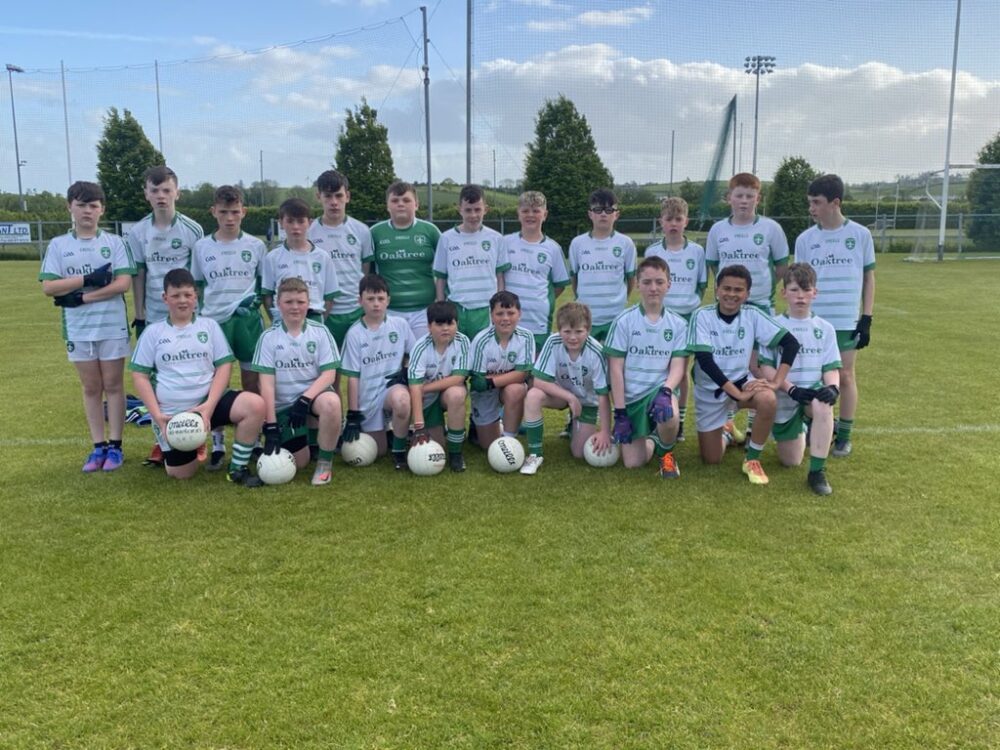 Drumragh U13 boys lose out in league semi-final

Patrick GriffinMay 31, 2022Comments Off on Drumragh U13 boys lose out in league semi-final0102 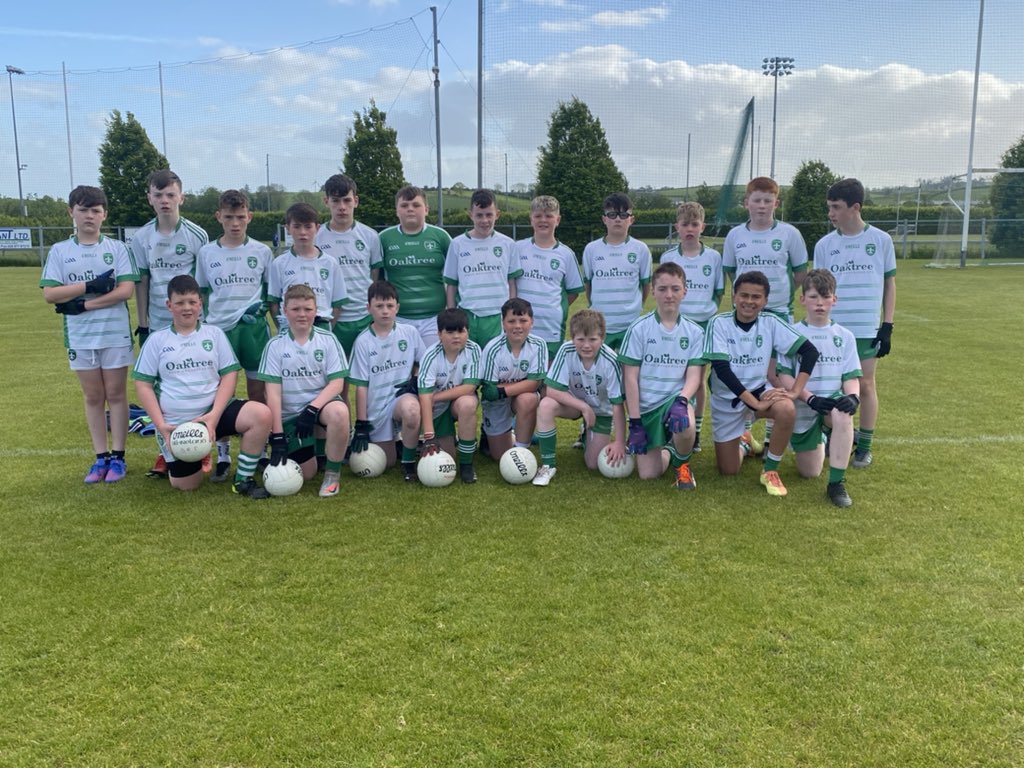 Drumragh U13 boys before their league semi-final against Galbally

Drumragh U13 boys lost out to Galbally in the league semi-final on Thursday evening.

This was a battling performance from Drumragh who made the home side earn every score.

Both sides had chances in the opening 10 minutes. Strong defending from Oisin Walsh, James Gallagher and Joseph Taggart prevented Galbally from scoring, while at the other end of the field, Drumragh were unlucky not to score from the good play of Tom Barrett, Lorcan Starrs and Sean Sloan.

It was Galbally who did go in front with a point and from the next attack they would have added a goal only for a brilliant, brave block from full-back Tiernan O’Donnell.

Galbally doubled their lead but Drumragh almost went in front from the next passage of play. Conor Fyffe did well to win the ball back at midfield, he exchanged passes with Tom Barrett and his long ball into the full-forward line was won by Shea Mullin who turned his marker and had his shot saved by the Galbally goalkeeper.

Padhraig Gormley made a terrific goal-line clearance to stop a Galbally goal, while Matthew Barrett, Matt Gallagher and Conor Fyffe were involved in a number of Drumragh attacks.

Galbally added two points and a goal before half-time. 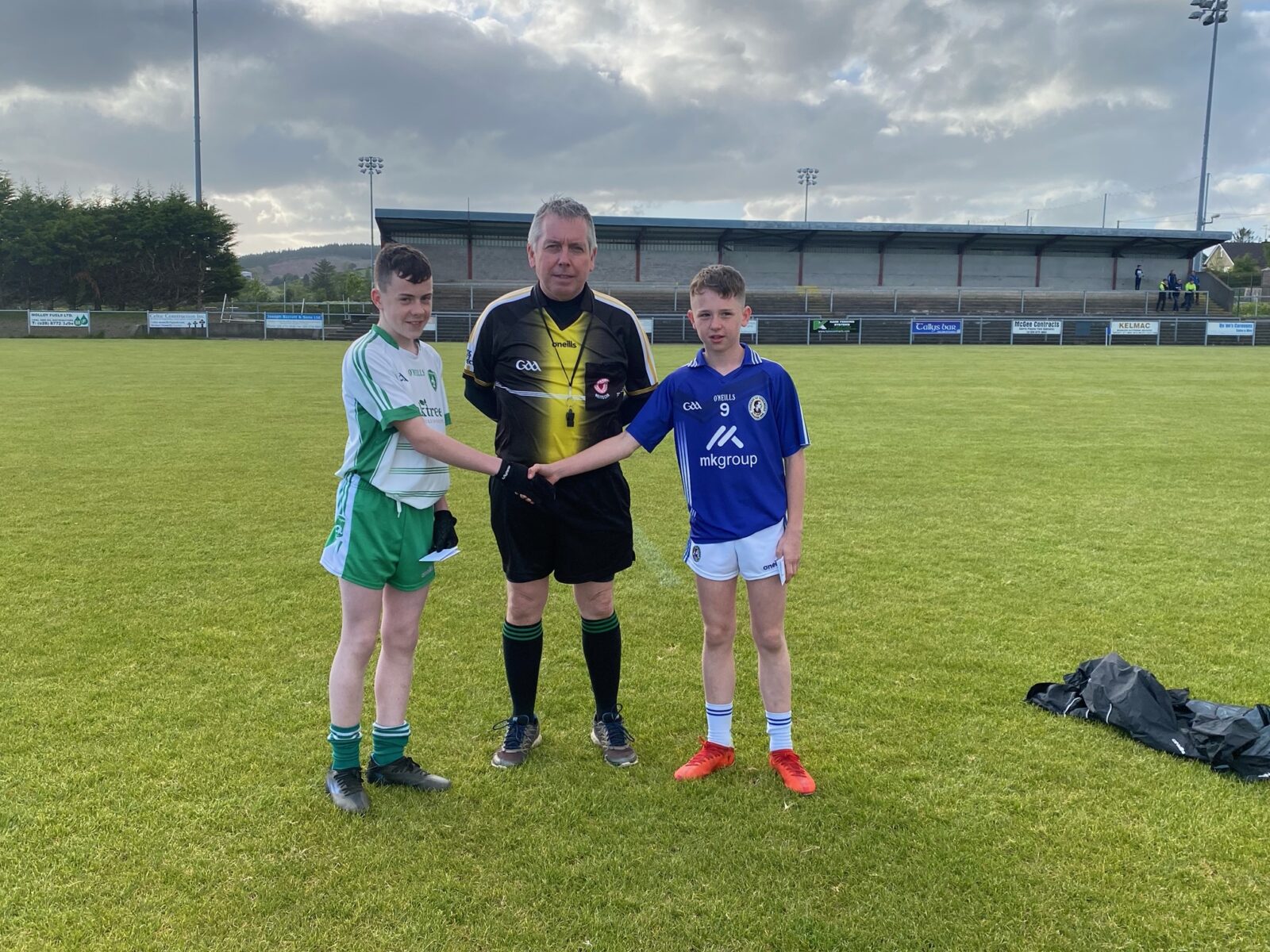 Drumragh captain Matthew Barrett with the Galbally captain and referee

The home side increased their lead at the start of the second half but Niall Gormley responded for Drumragh with a well-worked point after Matt Gallagher and Niall Burt had set up the chance.

With the help of the introduction of substitutes, Drumragh created a few goal chances, Ollie Hagan had a shot cleared off the line while Conor Fyffe forced the Galbally goalkeeper into a good save.

Galbally went up the field and pointed despite a wonderful save from Drumragh goalkeeper Matthew O’Doherty and added another before the full-time whistle as they claimed a spot in the league final.