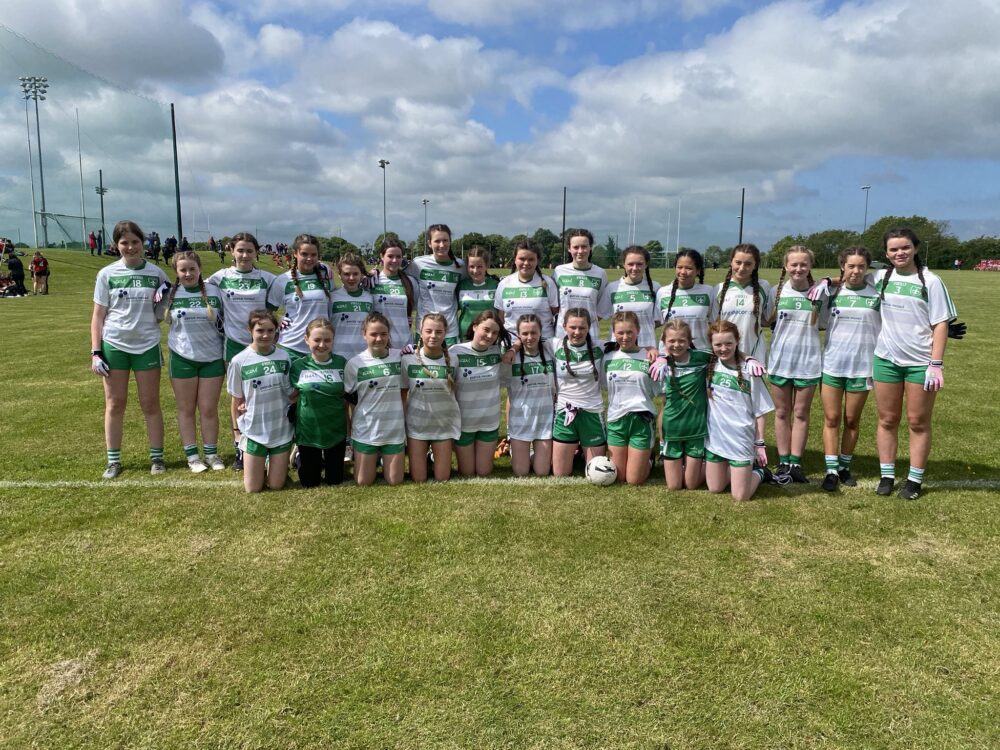 Patrick GriffinJune 6, 2022Comments Off on Drumragh U15 girls perform brilliantly at Féile1147 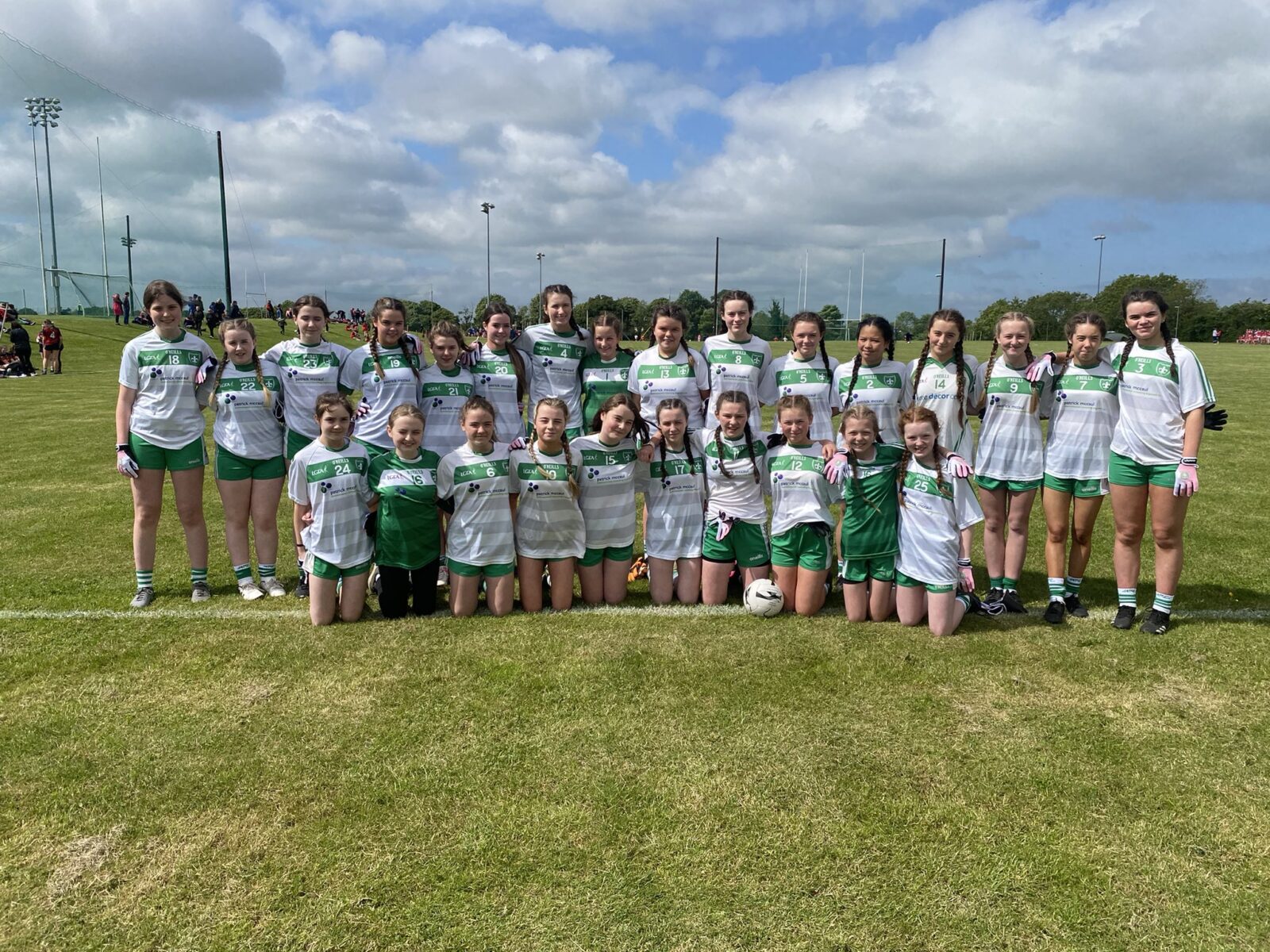 Drumragh U15 girls pictured before their opening game at the All-Ireland Féile competition in Darver, Co Louth on Saturday

Drumragh U15 girls had a fantastic day on Saturday, representing Drumragh and Tyrone with pride at the All-Ireland Féile competition in Darver, Co Louth.

Drumragh played brilliantly throughout the day, reaching the semi-final after wins over Newtownbutler and St Brigid’s/O’Neill’s in the group stage.

Their opening game was against Fermanagh champions Newtownbutler. Drumragh got off to a terrific start with Rihanna Mullin, Rihanna Barrett and Amy-Lee Burt all finding the back of the net.

The defence was superb too with Genevieve Norris, Grace McCusker and Alanna McMenamin prominent.

Rihanna Mullin kicked a point having being set up by Dana Coyle while Jemma Barrett and Rihanna added goals.

Newtownbutler got on the scoreboard and had other chances too only to be prevented from scoring by Lily O’Kane and Cora Walsh.

Newtownbutler opened the scoring in the second half with a point and quickly added another. Rihanna Barrett answered back for Drumragh with an excellent score and then Amy Lee Burt set up Rihanna Mullin for a good goal.

Drumragh continued to attack and Fionnuala Barrett was denied a goal by a wonderful save from the Newtownbutler goalkeeper. Grace McCusker scored a point and Sadhbh Duncan concluded the scoring with a nice goal. 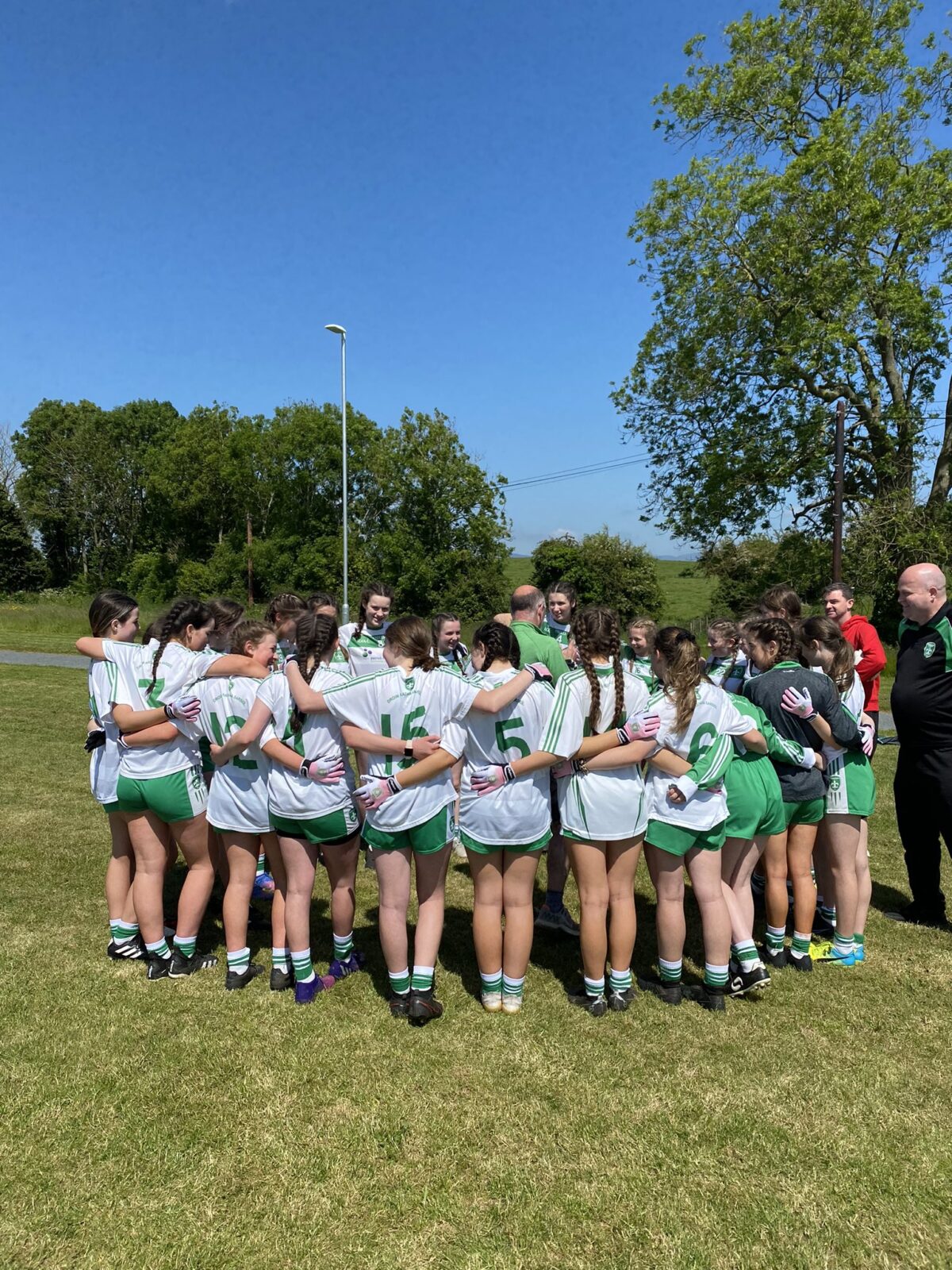 Game two saw Drumragh take on Clann na Banna. The Down side played with the advantage of the wind in the first half and converted an early penalty. Strong defending from Oonagh Pancott, Fionnuala Clarke and Mia Feeney frustrated the Clann na Banna forward line in the opening stages.

They stretched out their lead with two goals but Cara McManus responded for Drumragh with a good finish for a goal after Dana Coyle, Genevieve Norris and Olivia Kelly combined to create the chance.

Genevieve Norris put the ball over the bar before the break for Drumragh.

Clann na Banna had a lot of possession at the start of the second half but only had a point to show for their efforts. That was down to excellent defending from Drumragh with Alanna McMenamin, Anna Clarke and Lily O’Kane coming up with some big turnovers.

Drumragh then came roaring back into the  game with substitutes Dearbhaille McLaughlin, Nora McCloskey and Cobhlaith Murphy having an impact. Genevieve Norris started it off with a point, and she was then fouled for a Drumragh penalty with Rihanna Barrett stepping up and scoring with a slick finish.

Cara Kerlin and Mia Feeney remained vigilant at the back when Clann na Banna attacked but Drumragh ate further in the lead thanks to Rihanna Mullin who pointed after exchanging passes with Genevieve Norris. Grace McCusker came up from centre-back to score from distance, Lily O’Kane and Oonagh Pancott set up Dana Coyle for a point and Rihanna Mullin kicked a free.

Time ran out for Drumragh with Clann na Banna hanging on despite a strong display from Drumragh. 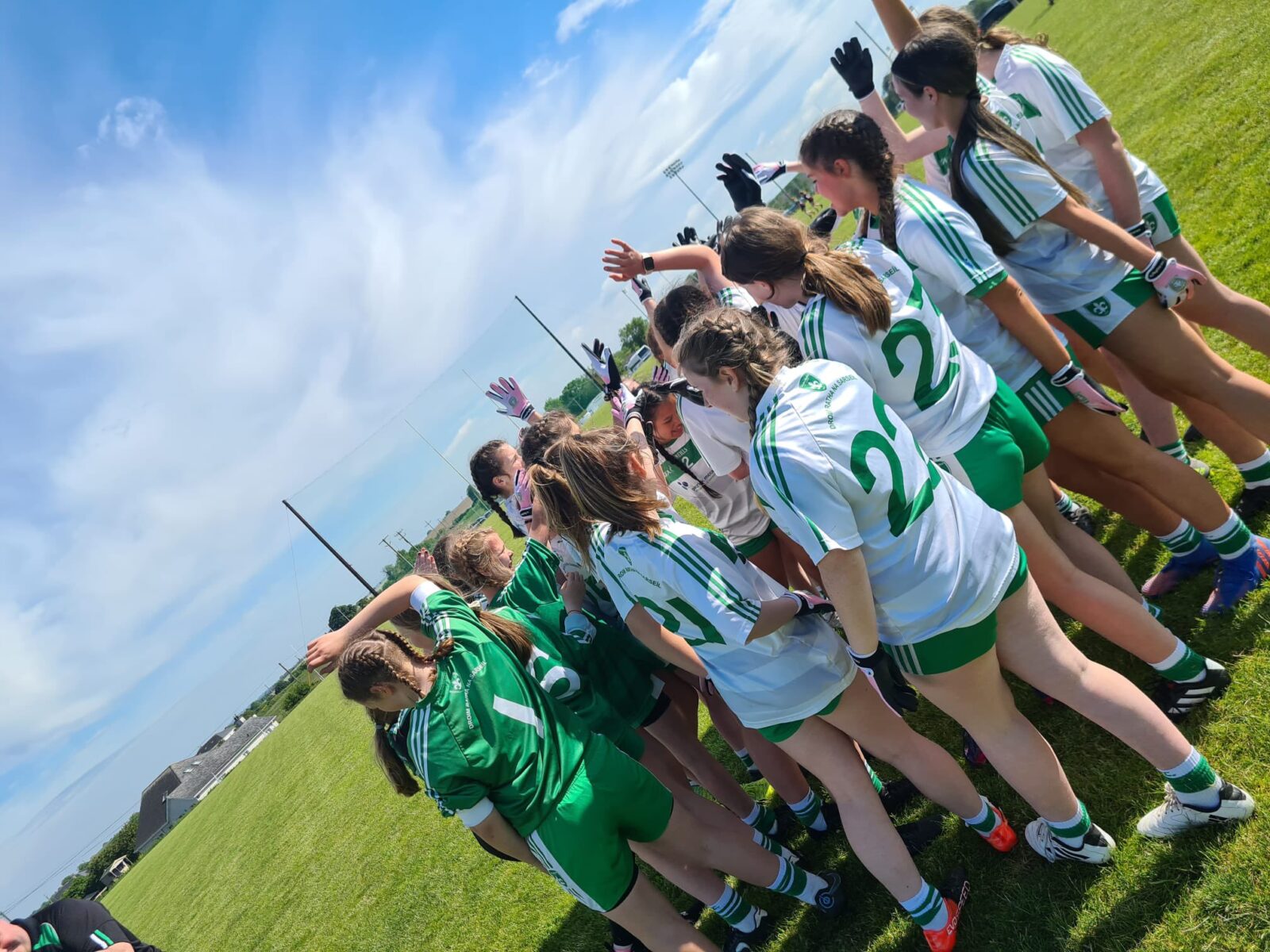 Drumragh U15 girls get ready for their Féile semi-final against Eoghan Rua, Coleraine

That set up a final group game against St Brigid’s/O’Neill’s from Monaghan, with the winner progressing to the cup semi-final.

Fionnuala Barrett got through for a good point, before a couple of points from Genevieve Norris put Drumragh ahead again.

A brilliant last-ditch tackle from Mia Feeney prevented St Brigid’s/O’Neill’s from getting their second goal of the game with goalkeeper Lily O’Kane completing the clearance. And from that turnover, the ball was moved up the field at pace, via Fionnuala Clarke, Caitlin McCarron and Cora Walsh and eventually to Rihanna Mullin, who made no mistake firing past the Monaghan goalkeeper to put Drumragh into a strong position.

St Brigid’s/O’Neill’s opened the second half with two quickfire points. But Drumragh did not panic and there was no drop-off in the hard work, determination and teamwork they had shown all day. Never was this epitomized more by Fianna McGuigan and Alanna McMenamin winning balls in the defence they had no right to win, and by Dana Coyle, running 100 yards forcing a turnover from what seemed like a lost cause.

Good play by Cora Walsh and Eva McGale allowed Rihanna Barrett to send over an excellent score with Rihanna Mullin adding another.

And after that kickout, the referee blew the full-time whistle and Drumragh had deservedly claimed a spot in the Feile semi-final. 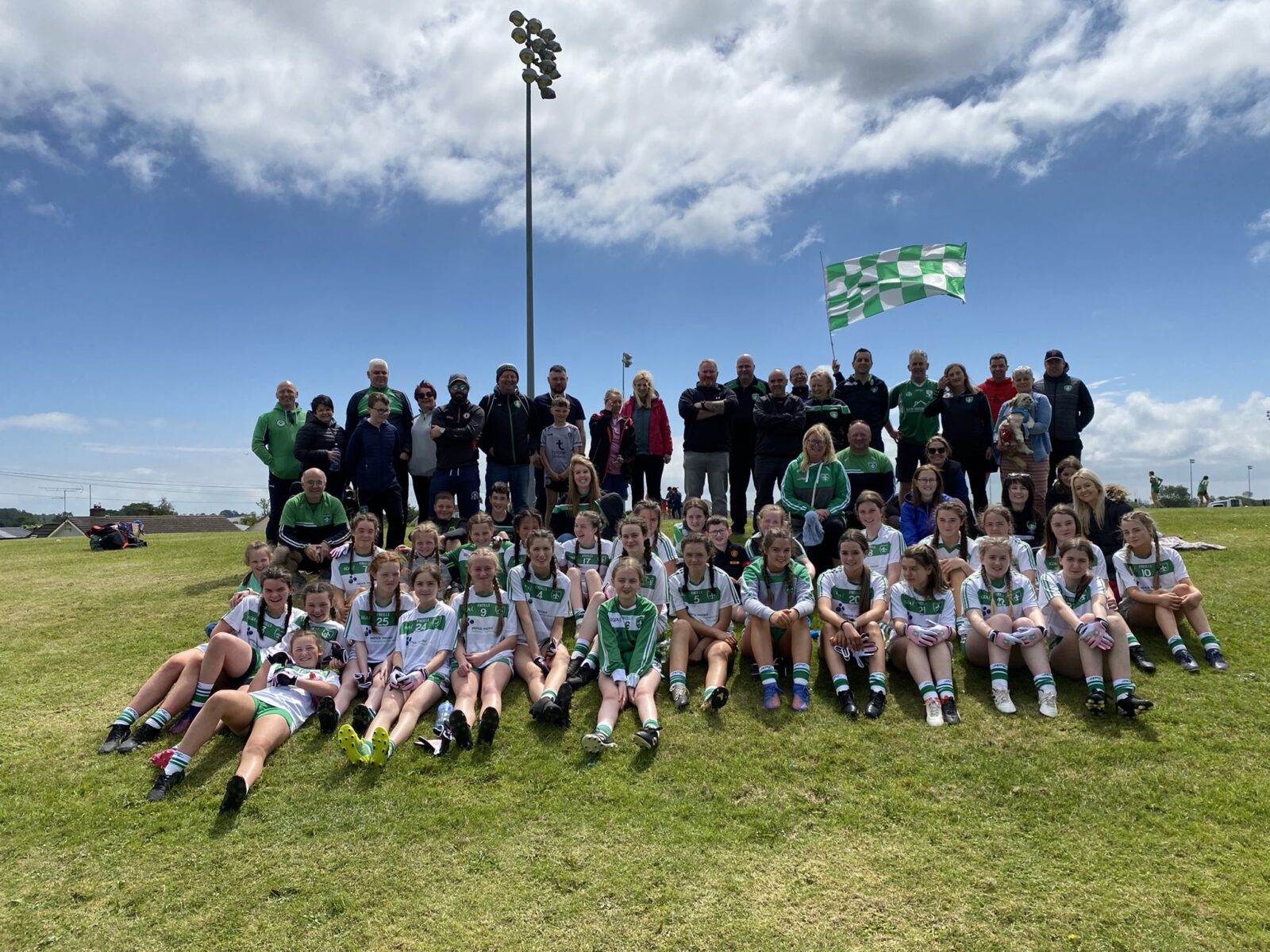 Drumragh U15 girls and supporters pictured at the All-Ireland Féile competition in Darver, Co Louth, on Saturday

Eoghan Rua applied the pressure at the start of the game. But Drumragh held firm with Fionnuala Clarke, Anna Clarke and Oonagh Pancott clearing their lines.

And it was Drumragh who went in front first. Cara Kerlin and Amy Lee Burt did well down the right wing, and Cara’s pass inside found Rihanna Mullin who placed the ball in the corner of the net.

Eoghan Rua went straight up the field and put one of their forwards through on goal. However, goalkeeper Chloe McGale protected Drumragh’s lead with a wonderful point-blank save.

The Derry side did register on the scoreboard with a point but Drumragh answered that with a Rihanna Mullin free after Cara McManus had been fouled. Dana Coyle caught the kickout that followed, drove through the Eoghan Rua defence and fired over a terrific point.

Eoghan Rua replied with a goal and had other chances too only for Grace McCusker and Mia Feeney to deny them. They did go in at half-time with the lead though with another goal despite once again Chloe McGale producing a brilliant save.

Eoghan Rua started the second half on top adding a point and a goal. But Drumragh, again, refused to give in. Jemma Barrett did really well to win a ball along the end-line and she passed to her sister Rihanna who blasted the ball to the roof of the net. Rihanna then kicked a good point while under pressure from the Eoghan Rua defence.

Unfortunately, the full-time whistle was blown not long after, with Drumragh’s bid to get to the final falling just short despite a tremendous effort.

Saturday was a proud day for Drumragh with every member of the panel playing their part. Winning the county title was a stepping stone to fantastic performances at the Féile, playing with heart, resilience and character in all four games.

Teamwork was the ethos. Well done to them all.